Table of Contents | Previous | Next
Researchers increasingly collaborate with colleagues who have the expertise and/or resources needed to carry out a particular project. Collaborations can be as simple as one researcher sharing reagents or techniques with another researcher. They can be as complex as multi-centered clinical trials that involve academic research centers, private hospitals, and for-profit companies studying thousands of patients in different states or even countries.
Any project that has more than one person working on it requires some collaboration, i.e., working together. In most projects, however, one person, commonly called the “principal investigator” or PI, is in charge. Others work under the PI’s direction. In this chapter, the focus will be on groups of researchers who are all more or less equal partners working on a common, “collaborative” project.
In collaborative projects, researchers continue to have the responsibilities discussed in other chapters in the ORI Introduction to RCR, but they assume some additional responsibilities stemming from collaborative relationships. These additional responsibilities arise from the added burdens of:
inherent in any large project but especially in collaborative projects. Special attention to these added burdens can help keep collaborative projects running smoothly. 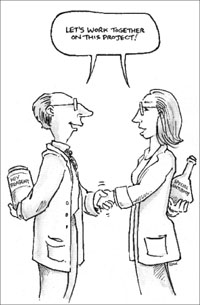